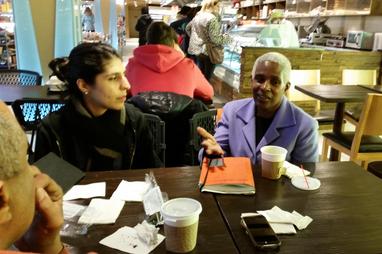 Project director: Marivir Montebon
The aspiring writers mentoring program of the National Writers Union Service Organization (NWUSO) started in February 2015 with nine writing trainees.
The NWUSO’s mentoring program is for enthusiasts who are in schools and universities as well as those in local communities. It is part of the effort of experienced writers to bring out the voices and stories of “unheard” ordinary people, workers, and women of color.
This is a synergistic project that integrates the existing talents and experiences of NWU writer-members with the energy and enthusiasm of school-based and community-based writers, said.
Issues on immigration, social justice, human and labor rights, culture and arts, and women’s rights and issues will be the main content of stories tackled in the mentoring program while developing the writing and journalistic skills of writers.
Participants will be guided the process of writing news features, essays, and other journalistic forms, as well as poems. Those interested in non-fiction novel writing, publishing and marketing will likewise be catered to.
The articles produced during the mentorship period of three months will be published in www.workerstories.org and syndicated in www.justcliqit.com, www.nwuny.org, and other allied websites and social media.
The NWUSO Volunteer Mentors include Terry Schwadron, former NY Times Senior Editor, Tim Sheard, publisher of Hard Ball Press, Marivir R. Montebon, publisher of OSM! online magazine, Gregg Morris, professor  of Journalism at Hunter College, Esther Cohen, book writer and poet, Peter Benjaminson, non-fiction novel writer, and Ninothchka Rosca, journalist and novelist.