If you can, attend our cocktail party on

(even if you can't attend the party!) 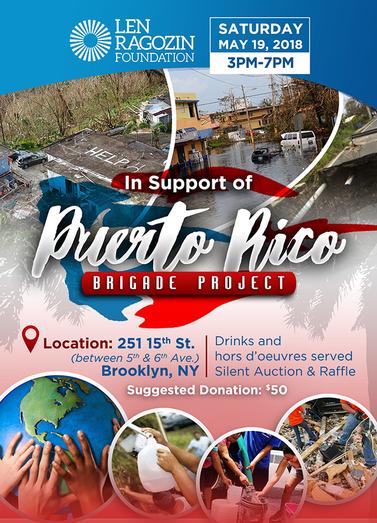 This June, twenty faculty members and students from New York area colleges are coming together for a solidarity brigade to Puerto Rico to conduct advocacy and volunteer work on the island. In the aftermath of September 2017’s Hurricane Maria, the effects of long and short-term systemic neglect have been particularly pronounced in the educational and residential infrastructure of the island. Puerto Rican workers have valiantly been fighting against school closings and privatizations which caused layoffs and the weakening of teacher unions.  These attacks on public education began before the hurricane, however the hurricane has been used to further attach public schools particularly those that serve poorer communities on the island. Even the University of Puerto Rico, which has faced sustained attacks by the Middle States Commission for years, has been threatened with losing accreditation and being shutdown in recent months.

Our mission will be to conduct a 7 to 14 day project of roughly 20 people (16 NYC-area college students and 4 faculty) in which we have two primary goals:

Already on the island, unions and local community groups are engaged in activities to address the educational and residential crisis in Puerto Rico. Our group will be working alongside several of these groups, namely: Laborers Union International of North America (LIUNA) Easter Region, Puerto Rico locals--Ponce and San Juan; Brigada Solidaria del Oeste--University of Puerto Rico Mayaguez English Department; and Federacion de Maestros de Puerto Rico. Protests, neighborhood canvasses, tree clearance, flood prevention, and school rehab are all projects currently underway that our group will be engaging in and supporting.

We will engage in activities sponsored and organized by school children, college students, teachers and other workers who live in and outside of San Juan, Ponce and Mayaguez.