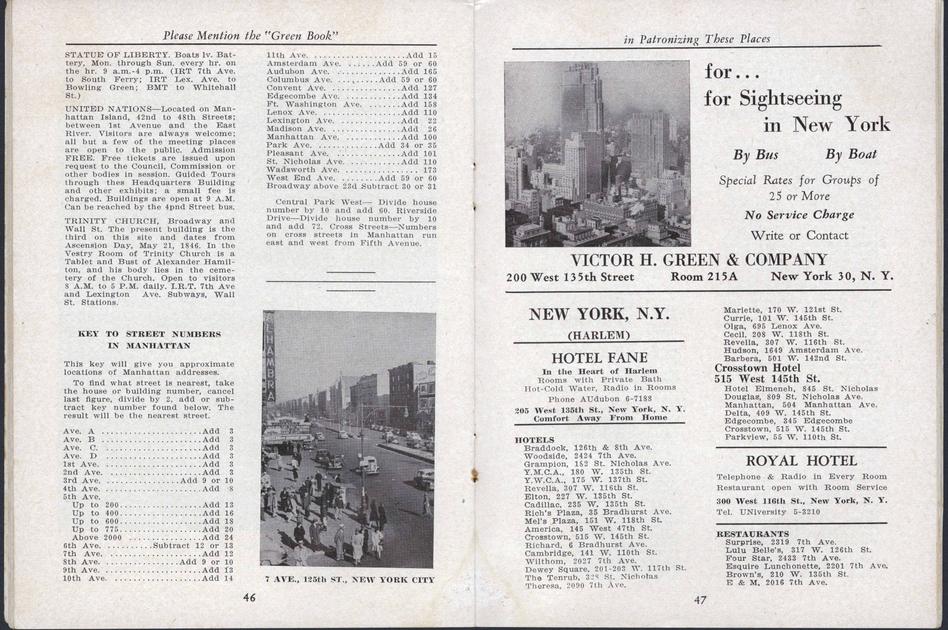 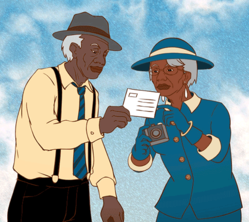 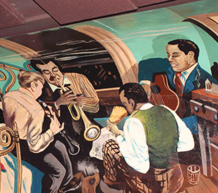 Published by Harlem-based U. S. Post Office letter carrier, Victor H. Green, between 1936 and 1967 as a travel guide for African-Americans during the days of Jim Crow laws, the “Green Book” listed the addresses of tourist homes, gas stations, restaurants, beauty parlors, and other establishments that welcomed African-Americans during times when many others did not. Even outside the deep South, travel could be inconvenient, embarrassing, or even dangerous if you were not white. Available at ESSO gas stations and other African American-friendly businesses, including some white-owned establishments, there were no phone numbers listed in the book, only addresses, so patrons would simply show up and be invited in, somewhat like a 20th century Underground Railroad.
Calvin Ramsey’s creative journey with the Green Book began when he wrote a fictional stage play of the same name that premiered to sellout audiences at Atlanta’s Theatrical Outfit. In 2004 the play was a finalist in the Last Frontier Theater Conference in Valdez, Alaska, where it was critiqued by Edward Albee and Patricia Neal, among others. Further readings were staged at La MaMa E.T.C. in New York and Baltimore Hebrew University, co-sponsored by the Baltimore Chapter of the NAACP, the Baltimore Jewish Council and the Jewish Museum of Maryland. Civil rights leader, Julian Bond, played a cameo role as Victor Green at a reading of the play at the Lincoln Theater in Washington, DC.
Translating the material for a younger audience, Ramsey wrote his award-winning children’s book, “Ruth and the Green Book”, with illustrations by Floyd Cooper. In 2011, Atlanta’s Center for Puppetry Arts turned the children’s book into a production that combined live actors, puppets, and animation, directed by Jon Ludwig with original music by S. Renee Clark and an afterword by Georgia’s Congressman John Lewis.
Becky Wible Searles (GBC Director / Co-Producer) owned One Eighty One Productions in NYC for 14 years, specializing in award-winning stop motion and mixed-media animation for clients including Nickelodeon, National Geographic, Walt Disney World, and Sesame Street, often combining it with live action. She appeared in two episodes of the PBS series “Reading Rainbow” and also created sets and props for live action and theatrical productions. She has been on the faculty of the School of Visual Arts, the New School, Marymount Manhattan, and Pratt Institute, currently residing in Atlanta where she has been an animation professor at the Savannah College of Art and Design (SCAD) Atlanta campus since 2009.
Becky took students to see “Ruth and the Green Book” at Center for Puppetry Arts and invited Calvin to speak to her classes. Eventually Calvin asked, “Any interest in making a short documentary together interviewing people I know who have used the Green Book?” and Becky happily answered, “Sure, as long as we can include some animation!” What started out as an Atlanta-based short film with a student crew has grown into a professional level one-hour documentary featuring 12 live action interviews related to the Green Book and travel during Jim Crow interspersed with historic photographs, memorabilia, and mixed-media animation. Recently segments have been shot at MOMA’s Jacob Lawrence show, NYPL’s Schomburg Center for Research in Black Culture (largest known collection of Green Books), and iconic locations in Harlem including exteriors of Victor Green’s former apt (across the street from Duke Ellington’s residence) and publishing office, as well as Minton’s (formerly Minton’s Playland), part of the Cecil Hotel, listed in the Green Books.